Is it possible for disabled people to be considered stylish and elegant? Though much has been done to break down the inhibitive perceptions of disability in the world of TV and sport, for example, fashion remains the last place anyone would expect to see a person with a physical handicap. Or is it?

When one thinks of fashion, one’s mind invariably turns to glitzy catwalks, gigantic billboards and glossy magazines. The clothes are stunning, and the models who show them off, no less so. It would seem bizarre, therefore, to think that a disabled person might somehow manage to make their mark in this exclusive society of superficial (arguably unobtainable) perfection. But, little by little, a change seems to be occurring. 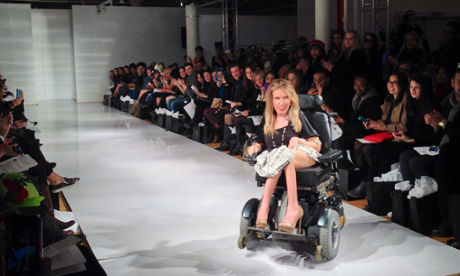 Dr. Danielle Sheypuk surprised many when she graced the catwalk as a model for Carrie Hammer at New York Fashion Week.

Earlier this year, licensed clinical psychologist, Dr. Danielle Sheypuk became the first ever model in a wheelchair to be featured at New York Fashion Week. Dr Sheypuk was chosen to showcase Carrie Hammer’s debut spring collection along with several other individuals with disabilities. The emphasis was on role models rather than fashion models.

Sheypuk’s appearance caused quite a stir and highlighted that beauty cannot be defined as narrowly as previously thought. There is no doubt that fashion operates within strict parameters of what is considered sexy and attractive and anything which falls outside these boundaries is instantly excluded. Seen in this light, Hammer’s show was something of a trailblazer.

Closer to home, there is other evidence to suggest that maybe the doors of the fashion industry are not completely closed to the disabled community. Kelly Knox is a London model who was born without a left forearm. The twenty-nine-year-old was propelled into the lime light after winning the BBC’s ‘Britain’s Missing Top Model’ in 2008 and has since won modelling contracts for some leading household names including Debenhams and Marie Claire.

Kelly Knox – the UK model who shot to fame after winning BBC’s ‘Britain’s Missing Top Model’ now works for some of the fashion industry’s top brands.

Despite her success, however, Knox appreciates there is still a long way to go. As an ambassador for UK Charity, ‘Reach’ (the association for children with upper limb deficiency), she encourages the young members to be confident and positive about their challenges. “Difference,” she maintains, “ is something to be proud of”.

But the most recent, and potentially most significant occurrence regarding disability in fashion, is GAP’s decision to appoint RJ Mitte as one of the faces for their Spring 2014 catalogue. The dashing ‘Breaking Bad’ star has cerebral palsy and was hired by the American clothing giant, along with Theophilus London, the Trinidad-born rapper.

In one sense, the fact that Mitte was approached is no surprise. After all, he was an integral cast member of undoubtedly the most successful US TV series of all time. His fame alone means he is instantly recognisable and adds considerable clout to the GAP brand. Furthermore, it is obvious that there is serious mileage for any global company in demonstrating to their customers just how disability conscious and inclusive they are. Would Mitte have won the contract had he not been such a huge star? It seems doubtful. Nevertheless, the fact that he has cerebral palsy should not be overlooked.

RJ Mitte – the star of the hit US television series, ‘Breaking Bad’ recently signed a modelling contract with US clothing giant, GAP.

The choice to select him could definitely be seen as a statement fashion is relevant to everyone, even those with a disability. The fact that a disabled person is now being plastered across billboards in the USA as a fashion icon is an unbelievable boost for the disabled community and disability in the fashion industry. Disability, it seems, is far more acceptable in this previously intolerant arena, where any imperfection was once ruthlessly ruled out.

I say ‘imperfection’, but of course, that word is, in itself, open to massive interpretation. Today, being different (as long as you are not too different!) can be seen as quirky and attractive. There is no doubt that there has been a move away from the previous notion that all fashion shoots must be air brush-perfect. There has also already been, furious debate over the ‘size zero / plus size’ phenomenon, an argument which shows no sign of abating.

It’s a thin line, but it’s fair to say that physical disability can carry with itself a similar sense of individuality and attraction. It might, dare-I-say-it, even be considered ‘cool’, though I make that assertion with extreme caution and sensitivity. With that in mind, is it really all that astounding that a major high street name should position itself as being bold, different and unique by having a handsome megastar with a disability as one of their key ambassadors?

It’s important not to sound cynical here. Whilst it would be wild hyperbole to suggest that the way has been cleared for all disabled models in the fashion industry, the RJ Mitte’s contract with GAP represents a significant shift in how the fashion industry and indeed the public at large regards disability.

It is too early to say for sure, but there is definite proof to suggest that the previously unimpeachable rules which govern what it is to be beautiful in today’s society are slowly being chipped away. It won’t happen overnight, but perhaps the fashion world is finally coming round to the idea that perfection need not necessarily be perfect.