The recent exposure of local councillor, Colin Brewer, who told charity workers that disabled children should be put down as they “cost the council too much money” caused understandable outrage a couple of weeks ago. But are Brewer’s comments really so shocking? After all, we already live in a society which permits euthanasia and where disability is grounds for abortion. So were the controversial words of Councillor Brewer really so extreme or does the former public servant have a point?

When I read Colin Brewer’s comments on the train on the way into work one morning last week, my eyes rolled. Here we go! I thought. Another crusty old politician making outlandish comments, bound to offend.

Councillor Colin Brewer of Cornwall Local Council in the UK, who was reported for saying that “disabled children cost the council too much money and should be put down”. He later resigned.

But, though I was appalled that anyone (not least someone holding a position of public office) might make such crass comments, I did not dwell on Brewer’s outburst. Instead I dismissed them as the idiotic ravings of a foolish man and went about my routine. I certainly did not intend to make this story the subject of my blog.

However, once back on the train after a full day in the office, I began reading a few articles and comments, which had been posted in reply to the initial burst of media outrage. It was then that my skin began to prickle . “It’s already being done” wrote one journalist commenting on the fact that euthanasia programmes already exist. This final treatment effectively ‘puts down’ disabled people who suffer so much pain and despair that their life is not considered worth living.

Another commentator pointed out that parents may choose to terminate a pregnancy if they discover their child has a diagnosable disorder such as Downs Syndrome. I also noticed one member of the public who regarded the support of disabled people as something which flew in the face of Darwinism. In her opinion, in a society where natural selection was allowed to run its course, many disabled people, especially those requiring full time care, would undoubtedly perish. When one considers these arguments objectively, do Colin Brewer’s words seem quite so brash?

One might go further and say that to adopt the moral high ground and condemn the old man’s view appears, at best naïve, at worst hypocritical. So is Councillor Brewer right? Should we be employing a system of mass euthanasia to exterminate every disabled child and eradicate every faulty gene? 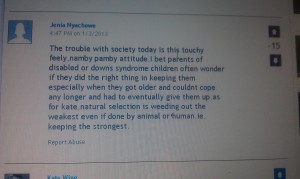 One of the extreme views expressed by a misguided member of the public in the UK tabloid, ‘The Mirror’.

For a moment (actually it was only the briefest of seconds,) I did see where the people who were expressing these concerns were coming from. But then I suddenly snapped out of my stupidity and realised that they and Mr Brewer were, in fact, talking utter nonsense!

The first and most obvious argument against Colin Brewer’s misguided exchange is that he saw disabled children as an economic drain on society. No doubt he has arrived at this view due to the plethora of recent tabloid articles which paint disabled people as ‘scroungers’. Disabled children may cost the tax payer, but so do old aged pensioners, unemployed lager louts and local government officials claiming far too much on expenses. Maybe they should be culled first!

The real truth of the matter, is that disabled children can grow into adults who have much to contribute to society both culturally and economically. Society’s role is to support and encourage disabled children as with any other vulnerable group so they can feel like they are a valued member of society, not cast them out as lepers. True, there will be those disabled people who do require constant care, but even then, they are still able to enrich our communities.

Take the University of Rhode Island student Andrew Pilkington. He has severe cerebral palsy, but still wishes to be a film director. Unable to use his hands effectively, he edits his movies using his nose and feet! Viewed by Mr. Brewer, the cost of his care may be seen as an impossible burden. But the truth is, given the right encouragement and support, people such as Andrew, have just as much chance of playing a full and valuable part in the community as any able-bodied person.

Andrew Pilkington has severe cerebral palsy and dreams of being a film director. He edits his movies with his nose and feet. Should he be put down?

Choice and the value of life

The articles I read which highlighted the existing euthanasia programs, made it almost appear that assisted suicides were widespread. In reality the practice of euthanasia and assisted suicide is only permitted in Switzerland and a handful of Benelux countries and US states. It is totally illegal in the UK and this does not seem likely to change anytime soon. The regard we have for the value of human life remains high whether the person is able bodied or disabled.

Even where people decide there is no other route than to leave this life, it is still a choice. As for parents who decide to terminate a pregnancy on the grounds of a high risk of disability, this too is a decision which is arrived at only after painstaking consideration of all the facts and possible prognoses.

There is no doubt that disability is a challenge. It is a tough life. No one in their right mind would wish to be disabled. But to argue that Brewer’s comments should be assessed against the backdrop of a society which already permits euthanasia and abortion on the grounds of disability, is nothing less than wild hyperbole!

Darwinism and the civilised society

As I read the many comments by members of the public when this story first broke, I noticed that one of the recurring arguments of those who sympathised with or even supported the comments of Councillor Brewer, was that of Darwinism.

By keeping disabled people alive, they postulated, we are going against the grain of natural selection. I’ve heard this tedious view expressed so many times that frankly I’m getting a little bored of it! The fact of the matter is that true Darwinism ceased to apply to the human race a long, long time ago. For hundreds if not thousands of years, we have been finding ways to cheat natural selection. From vaccines and antibiotics to unemployment benefits and social housing… even the introduction of botox!

The truth is that human civilisation has long gone beyond the crude trials of life which play their part in the wild. Human society cares for its vulnerable, its infirm and its elderly. It is this characteristic which is one of the factors putting us at the top of the food chain and the dominant race on the planet. A race that cares for those less fortunate and finds a place for everyone, is a strong one.

Earlier in this blog, I mentioned Andrew Pilkington who, despite severe cerebral palsy, is determinedly pursuing a career in film directing. I hope he makes it. I have no doubt that if he does, society will benefit from movies coloured by his unique view on the world.

The problem with our community is that we still view disability in very black and white terms. I’m not trying to say that I, or any other disabled person are the same as you abled-bodied people out there. We are not. Most of us are substantially physically weaker. But that does not mean we have no contribution to make to society. On the contrary, the lives of some disabled people have proved invaluable.

Without the artistic and literary skills of Christie Brown or Lord Byron, for instance, the world would undoubtedly be a poorer place. Furthermore, would our understanding of the universe be quite so developed without the genius of Professor Stephen Hawking?

Looking beyond the disability

Councillor Brewer’s comments are those of a man who cannot see past the immediate disability and is obsessed by the immediate economic cost of any impairment.  He is not the only one. Despite the fact we find ourselves in the twenty first century, it seems that some people are incapable of looking beyond a person’s physical or mental handicap. Such individuals who judge a disabled person’s contribution to society and quality of life accordingly, will always come to the wrong conclusion.

The truth is, all disabled people are valuable assets. Yes, there are those whose disability, like Andrew Pilkington, is so severe, they may well require full time care and support. This may, God forbid, cost money, but that does not mean they have nothing to teach us and certainly does not mean society should cast them aside.

Euthanasia and assisted suicide do exist, but it is only pursued by a few truly and understandably desperate souls who can see no other way out. It is also true that parents may abort the pregnancy of a disabled child. This is a very sensitive area. A severely disabled child may live a very hard life, a life for which some parents feel they cannot provide the best care. Politicians have taken the decision that parents in this difficult position should be able to decide the best course of action for themselves.

But the fact that a pregnancy is terminated on the grounds of disability does not mean that we should make the automatic assumption that a disabled life is not be a  life worth living. Rightly or wrongly, euthanasia and abortion are available in today’s world. Though to say the existence of such final treatments effectively proves the worthlessness of a disabled life or provides a context for Councillor Brewer’s views is, quite honestly, flabbergasting.

Finally, to those who feel that we are somehow betraying Darwin’s doctrine, by supporting and encouraging disabled people to live and thrive, I say this: Let us strip away all forms of care and support for all people. Let’s dismantle the NHS, let’s abolish job seeker’s allowance, let us abandon the welfare state in its entirety!

Then and only then, would we be left with a society, which reflects Darwin’s beliefs. My guess is, however, it would not be a society to be proud of.