Who should be given priority on a bus? A disabled person or a mother with a young child? This was the question put to a judge in Leeds last September. Now the subject of an appeal, the issue seems set to attract even more attention with even greater ramifications for the disabled community.

Last September, Doug Paulley, a wheelchair-user from Wetherby, had been prevented from getting on a bus run by First Bus Group because a mother refused to move her pushchair from the wheelchair bay for fear of waking her child. After being forced to take a later bus, Mr Paulley took First Bus Group to court, arguing disability discrimination. 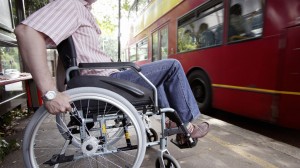 Mr Paulley was refused admission onto a bus in favour of a mother with a buggy.

First Bus Group operated a ‘first come first served’ policy in relation to spaces made available for disabled wheelchair users. Bus drivers could request that able bodied passengers who occupied wheelchair bays should move to another area of the bus. But if such a passenger refused, a bus driver could not require or force an able bodied person to make way for a disabled person.

The Judge disagreed. Finding in favour of Mr Paulley, Judge Isaacs ruled that the bus company should have done more to ensure the cliamant’s needs were accommodated. The fact that he was refused admission onto the bus was, in the eyes of the court, unlawful discrimination.

“The practice suggested by the Claimant, (Mr Paulley)” observed the judge “namely that the system of priority given to wheelchair users should be enforced as a matter not of request, to any non-disabled user of the wheelchair space, but of requirement is, to my mind, a reasonable one.”

The judge went on to state:

“Although such a policy might inconvenience a mother with a buggy that, I am afraid, is a consequence of the protection which Parliament has chosen to give to disabled wheelchair users and not to non-disabled mothers with buggies.”

Mr Paulley was awarded £5,500 and First Bus Group were told to change their policy.

This seems to me, to be a perfectly reasonable and clear decision. Although able bodied mothers are undoubtedly more vulnerable than ‘ordinary’ members of the public, the fact that they should rank behind disabled people, seems just. The Equality Act 2010 affords special protection to the physically incapacitated and the ruling chose to uphold this protection.

However, last week it emerged that First Bus Group have decided to appeal against Judge Isaac’s first instance decision, saying there is now “real uncertainty” as to how a bus company should now be expected to act in such a situation.

In my opinion, there is little uncertainty here. However, if the Court of Appeal were to overthrow the decision of Judge Isaacs, this would be a real blow for disabled people. Furthermore, it is arguable that the disability discrimination provisions contained in the Equality Act  would be undermined.

In an ideal world, I would prefer such matters to be resolved by common sense and politeness rather than in a court of law. However, if the legal system is to be involved once again, I can only hope the Court of Appeal chooses to safeguard the rights of disabled people and that the statutory commitment made by Parliament to the disabled community, as enshrined in the Equality Act,  remains unfettered.