We all need role models. Children look up to any number of famous icons. They may be premiership football players, NBA basket ball champions or international pop stars. There seems to be no shortage of celebrities competing for our adulation. But what about disabled people? Who can we idolise? Is there anyone out there in the world of celebrity who we can admire and emulate? Or is fame still a ‘no go’ area for disability.

Yesterday evening, Manchester city centre was reduced to chaos. Cars battled and bullied their way through the otherwise impassable streets as the town was almost brought to total gridlock. The reason: a bunch of fresh faced, dishevel haired teens they call ‘One Direction’!

One Direction – the acceptable faces of celebrity!

Hordes of screaming fans stampeded their way towards the heaving Manchester Arena to catch a glimpse of their heros and play a part in the mass hysteria that usually accompanies this cheeky quintet. As I dodged my way through the overpowering current of giddy young girls, I wondered what it is about celebrity that can drive a crowd of young kids absolutely bonkers!

No doubt many fancy the pants off one or perhaps all of the ‘famous five’! Others perhaps wish to mirror their fame and success. For most of the people in the audience, this is the closest they’ll ever get to the real thing. And yet, that doesn’t matter. Like it or not, hero worship is a part of growing up and rightly or wrongly, those youngsters look upon this foppy-haired, skinny-jeaned bunch as their idols. But what about disabled people?

It’s an interesting thought. Today’s celebrity obsessed media culture teams with hundreds of demigods and prima donnas from the world of music, sport and cinema. But start looking around for any disabled celebs and one is faced with fairly slim pickings. Is it not important that people with disabilities are just as able to identify with famous icons as able bodied people? 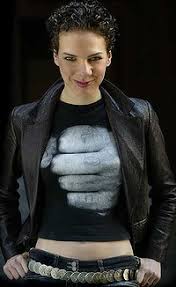 The fact of the matter is that famous people with disabilities are not so easy to come by. And when I say disabilities, I’m talking more severe physical impairments. In one sense, this is hardly surprising. One can hardly be expected to make the first eleven for Manchester United with cerebral palsy or spina bifida. Likewise a career as a solo artist seems doubtful for anyone with tourette’s!

One may point to the Paralympic Games as a world stage where disabled people can shine, and this is true. That said, the Paralympic games is only open to competitors with a disability. Furthermore, their celebrity status is still questionable. I’m not sure about you, but I don’t see many disabled people endorsing beauty products or insurance deals.

However, there do exist some areas of celebrity, where disabled people have managed to gain a small foothold. Focusing on my own disability, cerebral palsy, there are a number of ‘stars’ who have managed to take centre stage. Not surprisingly, many of these have found their niche on the comedy circuit.

Francesca Martinez is a prime example of a famous person with a disability who has carved out a career in the ruthless world of stand up. You may recall her as the disabled schoolgirl, Rachel Burns, in ‘Grange Hill’. Today, she is an established comedienne, who delivers a bitingly sharp brand of wit and satire. Her cerebral palsy affects both her movement and her ability to speak. However, Martinez has overcome these to cement her place as a highly regarded, brutally funny comedy persona.

Josh Blue is another famous comedian who has built a successful career in spite (or perhaps because) of his disability. Not only did he win the fourth season of ‘Last Comic Standing’, but he was also the first comic to perform on the Ellen DeGeneres Show. He has even represented his country in the US Paralympic football team in 2004. Not bad at all.

Comedy certainly provides the perfect vehicle in many ways for famous disabled people. It seems all great comedians need to suffer some kind of flaw. It is this that affords them a different perspective on the world in which we live and enables them to regard life through a different lens.

But if you thought the only famous people with disabilities came from comedy, think again. There are other celebrities who have made it in more ‘mainstream areas’ of show business. Such stars include the likes of RJ Mitte and Abbey Nicole Curran.

At 20 years old Roy Frank Mitte III is probably the most famous celebrity with cerebral palsy. His acting career started with a number of small roles including a part in Disney’s Hannah Montana. However, he got his big break when he landed the role of Walter White’s son in popular AMC series ‘Breaking Bad’. The Louisiana-born star is also set to join the cast of ‘The Devil’s Ink’ when it enters production in October this year, where he will be filming alongside Zoe Bell.

Adding a touch of glamour to the disabled celebrity scene, is Abbey Nicole Curran who wowed the disabled community and the world at large when she represented Iowa in Miss USA 2008. She was the first contestant to enter the competition with a disability. Add to these famous people with disabilities, the likes of Bonner Paddock, Stephen Wampler and Ashton Kutcher’s younger brother Michael, not to mention Nicolas Hamilton (Lewis Hamilton’s motor racing sibling) and it would seem there are plenty of famous people flying the flag for disability out there.

Nevertheless, even though there are notable examples of celebrities with disabilities, it is still clear that show business still regards them still with a degree of caution. RJ Mitte had to find the right agent in the form of Addison Witt, before he had any real success. Witt also has cerebral palsy and specifically searched for roles where Mitte’s disability might serve to educate the audience.

More revealingly, speaking during an interview to The Independent newspaper, Francesca Martinez’s , agent was told by popular comedy panel shows such as ‘Mock The Week’ and ‘Have I got News for You’ that she would not be invited to appear. According to Martinez, producers were worried that her presence might make the audience “too nervous”.

The problem is that whilst celebrity can celebrate the weird and the quirky to some degree, it has a real problem in recognising the handicapped or deformed.  When these disabled people do appear it is more often than not in the form of a documentary or reality show, where they can be safely ring fenced and boxed off.

Even though an increasing number of famous people with disabilities have made it into the cult of celebrity, it seems they have yet to be genuinely accepted. Whilst the efforts and successes of Martinez, Mitte and Curran should be applauded, therefore, disability in show business, it would seem, remains taboo.