As mentioned in the previous blog, the The Mermaid in The Gherkin Jar will be taking to the stage at The Lowry in a Northern Rose production as part of Flow Salford from 19 to 21 September 2014. Over the next few weeks you can read updates about rehearsals and other information in the lead up to the performance.

Following the success of their initial proposal to present a fifteen minute preview of the stage adaptation of The Mermaid in The Gherkin Jar at Flow Salford, rehearsals at Northern Rose are now well under way! 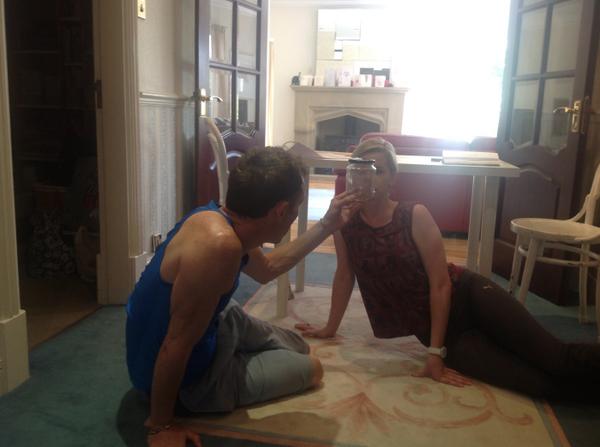 The mermaid in the gherkin jar! Richard Hansell and Amy Berry rehearsing

But how do you create a slick fifteen minute snippet from a far longer, more detailed novel? And how do you ensure such an abridged piece manages to deliver the main themes of the story whilst leaving the audience hungry to see the full adaptation?

For the sake of this abbreviated stage performance, the cast has been limited to just three characters: Christopher, Azalea and Christopher’s grandmother, Grandma Dougal. Whilst Christopher will be played by Richard Hansell, Amy Berry is to adopt the roles of Grandma Dougal and Azalea.

This has the effect of simplifying the production, resulting in minimal costume requirements and allowing the audience to focus their attention on the main characters with minimal cause for distraction.

The character of Christopher requires little if any costume changing throughout, whilst Amy’s transformation from Grandmother to mischievous mermaid is achieved through subtle alteration and a little theatre magic!

The aim of this piece was always to be as fluid and as seamless as possible. This is achieved through a cunning use of the set as well as some ingenious prop design! 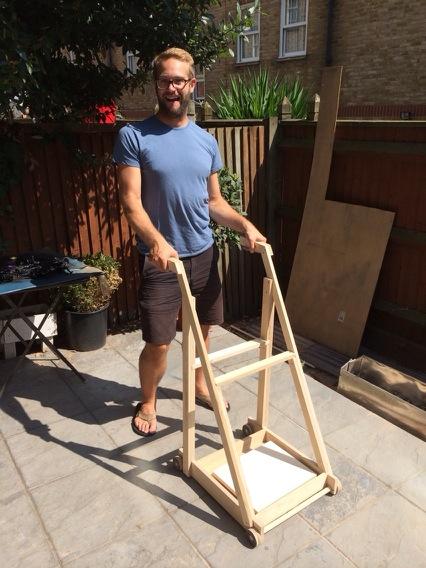 For instance, the table used in the opening sequence becomes the cupboard in which Christopher finds the mysterious gherkin jar containing Azalea. 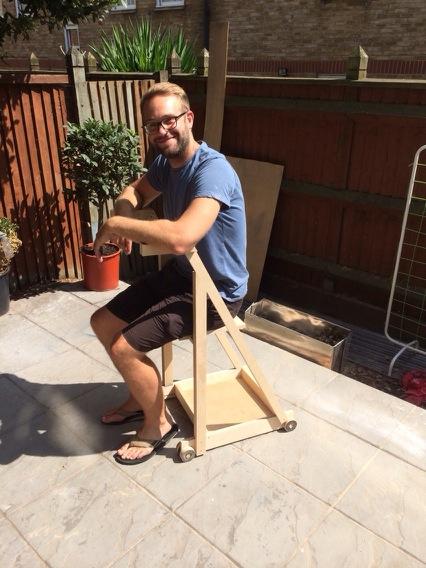 First it’s a rollator, then it’s a chair! Fantastic design by Charlie McKenzie!

However, by far the most creative piece of prop design comes in the form of Christopher’s rollator. This specially designed piece of apparatus not only forms Christopher’s walking aid, but also masquerades as his chair. Furthermore, it then transforms into his wooden trolley which performs the vital task of carrying the fragile jar on the long journey from Grandma Dougal’s kitchen to the pond in her garden into which Azalea is finally released.

Lavish sets and flamboyant costume design were never intended to play a role in this production. It was always the aim to stimulate the imagination of the audience, encouraging the theatre-goer to create the world which Christopher and Azalea inhabit. Clever direction therefore plays a crucial role in allowing the audience to witness what Christopher is seeing when he gazes into the murky gherkin jar.

I was fortunate enough to spend a day with Northern Rose as they experimented with various ideas.
The journey from page to stage is a magical one and it’s enthralling to be working with such experienced actors and directors who know exactly how to translate a written story into a visual work.

Dialogue plays a key part in communicating the main themes of the tale. Nevertheless, careful selection is needed to conjure a piece that will fit neatly into the fifteen minutes permitted. It’s a painstaking process, but already an exciting script is beginning to take shape. Metamorphosising into a new character is no mean feat for any actor. However, becoming a little boy with cerebral palsy carries an added challenge. For the depiction to be accurate, Richard Hansell spent a great deal of time with me, analysing my movement and asking a great deal of questions concerning the effects of the condition.

This is where brilliant acting can capture the essence of a character and translate it onto the theatre stage. The result was astonishing! There were times where I felt having watched a sequence, that Christopher had stepped out of the book and into the rehearsal room.

Amy Berry faced an equally interesting task in transforming herself into the beguilingly playful yet ruthlessly manipulative mermaid. Understanding the character and what drives Azalea is absolutely pivotal. I don’t want to give too much away, but having seen Amy rehearsing, I think you’ll be impressed!

Expect more updates as the Flow Salford festival weekend draws closer and, as always, feel free to comment below.