With only three months to go until ‘The Mermaid in the Gherkin Jar’ hits the stage at The Lowry Theatre, things are certainly beginning to take shape. May was a critical month seeing the actors getting to grips with the script. It also witnessed a short private performance of the physical theatre piece, where a select audience was given the opportunity to give their feedback on the what has been achieved so far.

It’s difficult to believe that nine months had already passed since ‘The Mermaid in The Gherkin Jar’ won Flow Salford Snippets in September 2014. So much has happened since then in terms of preparation work, gaining valuable funding from The Arts Council and, of course, developing a 15 minute ‘scratch’ into a full stage performance. 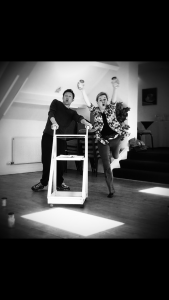 Rehearsal fun – but what are they up to?! (Richard Hansell and Amy Berry)

From an author’s point of view, it’s been a magical journey. Seeing the characters of the book being lifted from the page has been wonderful. I was lucky enough to see the ensemble cast of Richard Hansell and Amy Berry in action during rehearsals and they were nothing short of fantastic. Richard had just returned from working on ‘A View from the Bridge’ with Mark Strong in the West End whilst Amy had barely finished the impressive iMagician tour.

I saw both of them on two occasions during rehearsals as they brought the story to life and it was fascinating. Watching Richard develop the character of Christopher, the boy who faces all manner of challenges as he struggles to come to terms with his disability was incredible. Amy’s role as the mischievous mermaid, Azalea was equally captivating to watch as she begins to cast her magic and invite Christopher into her world. The demands of an ensemble cast, means that Amy must also play other characters such as the playful Benjamin and the strict and formidable Mrs Inkwell. It’s a task which demands a great deal of skill, but after watching a professional at work, I was deeply impressed.

The success of the piece owes a great deal, not just to the skill of the actors, but to the creative talent of Northern Rose, the company behind the physical theatre piece. In particular, Liz Collier, the founder and Physical Theatre Director of Northern Rose has been instrumental in bringing the story to life. Her knowledge and experience of ballet and musical theatre not-to-mention her understanding of movement has been critical in translating a challenging piece to the stage. Theatre Director Amy Liptrott has already played a crucial role in developing the dialogue and her insight has been nothing short of invaluable. 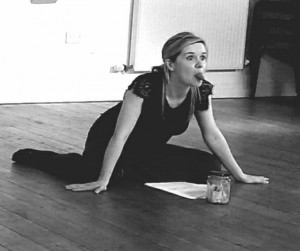 What has made this piece particularly interesting is the simple, yet highly effective use of props. The original fifteen minute snippet adopted a ‘low-fi’ approach, which has been continued for the full-length production. Therefore, the use of props has been kept to an absolute minimum – a table and chairs, a wooden walking frame and, of course, a varied assortment of gherkin jars! However, despite the sparseness of the production, the overall result is a hugely rich and powerful piece. The movement and storytelling captures the imagination from the start and the audience is drawn in from the moment the protagonists appear.

There is still much to do before the final production on Sunday 13 September. There will be two performances that afternoon, with tickets going on sale at The Lowry Theatre very shortly. As the author of ‘The Mermaid in the Gherkin Jar’, I cannot wait to see the full show! Please feel free to follow @TheGherkinJar and @NorthernRosePTC on twitter and keep checking The Lowry Theatre website for more details.