On the 10 June 2014, the Manchester Museum will host a rather unique one-man show, designed to explore and question our perceptions of disability. Written and performed by Mat Fraser, ‘Cabinet of Curiosities: How disability was kept in a box’ uses museum artefacts  through the ages to analyse society’s view of the disabled. Furthermore, it  hopes to realign the marginalised stance taken by museums who previously have treated disability as more of a footnote than an integral part of history.

How do museums portray disability? It’s an interesting thought. Although the disabled community has always had a role in society, it has arguably never received the credit it deserves.  Instead, observes Mat Fraser, disability has been relegated to the sidelines, a mere appendix to the development of modern culture. 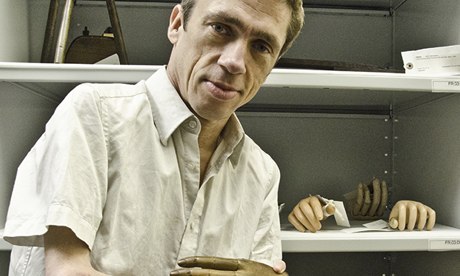 However, a painstaking exercise of sifting through the archives of the Science Museum, the Royal College of Physicians, Manchester Museum and the Hunterian Museum has led Fraser to uncover a rich source of evidence underpinning the contribution that disabled people have made through the years.

Mat, who has foreshortened limbs, due to the harrowing effects of the thalidomide drug which was given to his mother during pregnancy, originally envisaged his piece as a hysterical comedy cabaret based on all the freakish exhibits he expected to find. However, as he did more research, he found himself becoming increasingly angry at the way the medical profession approached disability.

He also queried the fact that, though many museums had material reflecting the lives of disabled people,  it was seldom displayed. According to the actor and performer, museums have traditionally adopted a negative view of disability, labelling people’s differences as inferior or deviant. It is Fraser’s hope that this view will begin to change and the disabled community’s role in history will be seen as more than simply evidence of certain conditions or medical treatments.

Mat’s show originally formed part of a wider project called ‘Stories of a Different Kind’, led by the Research Centre for Museums and Galleries. It ran from July 2012 to February 2014 and was developed to try and encourage people to challenge negative and discriminatory attitudes towards disabled people.

As with any initiative of this nature, it can only get the ball rolling. Nevertheless, Mat Fraser’s show on 10 June has received excellent reviews and promises to be as bold as it is enlightening. Tickets  cost only £5 – go and see it!