In September 2014, physical theatre company Northern Rose won the Flow Salford ‘Snippets’ competition at the Lowry Theatre with their stage adaptation of ’The Mermaid in The Gherkin Jar’. It was a fantastic achievement and I could hardly believe we’d done it. The work is not over, however, and the next step in bringing the novel from page to stage is well under way.

Happy New Year everyone! It’s been a while since I’ve taken to my blog so I hope you enjoyed the Christmas break and are ready and raring to go in 2015! 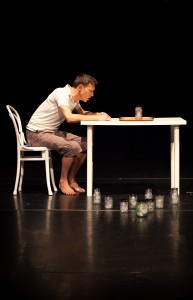 Looking for mermaids in gherkin jars! – Richard Hansell as Christopher in ‘The Mermaid in The Gherkin Jar’

For me, the New Year began with a meeting involving the directors at Northern Rose Theatre Company as well as associate director of the Lowry Theatre, Matt Eames. Winning Flow Salford ‘Snippets’ was a fantastic achievement and, to be quite honest, I never dreamed we would get this far. But thanks to The Lowry, we now have a very real chance of bringing ‘The Mermaid in The Gherkin Jar’ to life.

Flow Salford was an excellent springboard. It gave Northern Rose the opportunity to present a fifteen minute ‘scratch’ of the play to a studio audience at The Lowry including a panel of judges. We won, thanks in no small part to the brilliant directorial skills of Amy Liptrott and the creative genius of Liz Collier, founder of Northern Rose. 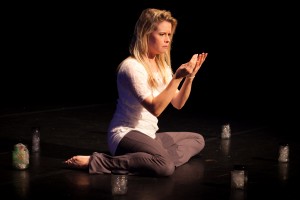 Hands as rough as a barnacle!! – Amy Berry as mischievous Mermaid, Azalea, in ‘The Mermaid in The Gherkin Jar’

Rich Hansell and Amy Berry delivered fantastic performances impressing Matt Eames, of The Lowry Theatre and Miriam O’Keeffe, Director of the BBC Performing Arts Fund who commented that the piece had huge potential for development into a family show and “translated to all ages”.

So, what next? In September 2015, Northern Rose will be producing a full studio performance of the piece at The Lowry Theatre with the intention of developing this into a touring show. To that end, I will be joining them on 22nd January 2015 at The Lowry to pitch to a number of northern theatre representatives who will hopefully be willing to support the play. 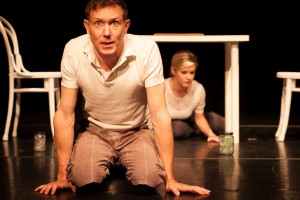 “Really beautiful storytelling” which can “translate to all ages” – Miriam O’Keeffe, Director of The BBC Performing Arts Fund

We’ve still got a long way to go, but I’m hopeful. I’ll keep you all posted with developments and you’re very welcome to come along in September. Please do – it promises to be a great show!