The major Hollywood studios seem inexhaustibly obsessed with fairytales! Over the past ten years we’ve seen a multitude of these fantastic adventures brought to life. From witch hunters to sleeping beauties, it would appear the LA movie machine has a never ending love affair with such bedtime stories and this year will be no different. But could it be that 2015 will favour tales with a more aquatic bent? Is it finally going to be the year of the mermaid?!

It is not difficult to see why fairytales are popular with Hollywood. With their sense of mystery and magic, their ethereal storylines, often with irresistibly dark undertones, are perfect for the silver screen. After all, they appeal to such a broad audience who have grown up with these folk legends. The special effects capabilities of modern-day film making coupled with multimillion dollar budgets make possible the retelling of even the most fantastical yarn with A-list stars queuing up for roles.

Ten years ago, Matt Damon and the late Heath Ledger starred in ‘The Brothers Grimm’, a fictitious account of two travelling con artists, who stumble across a real fairytale. The film whetted the appetites of cinema audiences for a medley of folk lore adaptations including ‘Red Riding Hood’ (2011), ‘Mirror Mirror’ (2012), ‘Snow White and The Huntsman’ (2012), ‘Hansel and Gretel: Witch Hunters’ (2013) and ‘Maleficent’ (2014).

The 2014 film ‘Into The Woods’ starred Meryl Streep, Emily Blunt, and Johnny Depp

Last year closed with ‘Into the Woods’, a musical fantasy film from Walt Disney, which cleverly intertwined various Grimm tales including ‘Little Red Riding Hood’ and ‘Cinderella’. The rich cas boasted the likes of Meryl Streep and Johnny Depp and grossed over $150m at the US box office.

However, if you thought that 2015 might see a decline in fairytale adaptations you’d be wrong. On the contrary, if anything cinema-goers are likely to be treated with an even greater assortment of magical adventures.

Lily James as ‘Cinderella’ to be released later this year

Lily James of ‘Fast Girls’ and ‘Downton Abbey’ fame is set to assume the role of Cinderella in a lavish interpretation of the Grimm brothers classic. This is to be followed by ‘Pan’, due to be released in July. The impressive line up of Hugh Jackman, Amanda Seyfried and Rooney Mara will explore how the legendary child hero, Peter Pan, came to be the keeper of Neverland. Expect adventure, excitement and a surprise appearance by English super model Cara Delevigne as a dazzlingly beautiful siren of the sea. Yes, that’s right, the face of Burberry will be wowing viewers as she makes a splash in her fourth movie role. 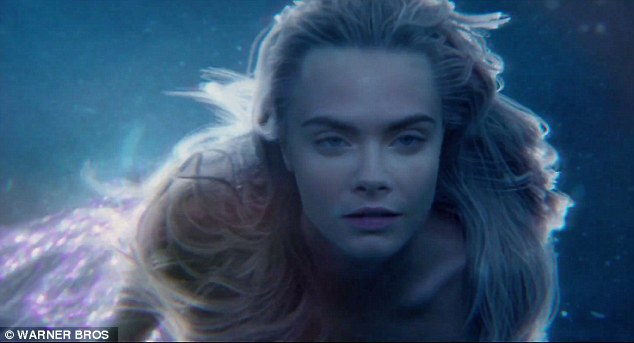 Cara Delevigne makes a splash in the upcoming 2015 movie, ‘Pan’

But by far one of the most hotly anticipated films of the year is Sofia Coppola’s modern take on Hans Christian Andersen’s tragic story, ‘The Little Mermaid’. Rumours abound as to who will play Ariel, the hapless mermaid who falls victim in a heartbreaking tale of unrequited love, though it looks as if Emma Watson could snatch the role. The film has been in the planning as far back as 2011 and although the details are unclear, it is believed that the picture will be a more loyal retelling of the exquisitely painful masterpiece.

So, could mermaids finally take centre stage in 2015? Keep your fins crossed!